Chitungwiza female Pastor "whooped" her landlady who had a habit of sampling her hubby's "anaconda" when the pastor was not home !!! 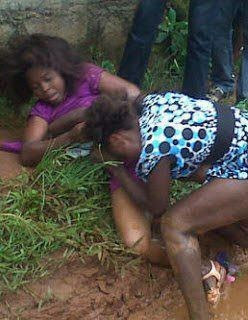 A Chitungwiza female pastor and her two accomplices were taken to court on Friday after they teamed up and assaulted another congregant accusing her of  snatching the pastor’s husband.
Pastor Angeline Shambawamedza (31) of Jesus the Saviour Ministry (JSM) and her accomplices Diana Shambawamedza (34) and Precious Alifandika (25) appeared before a Chitungwiza magistrate facing charges of assault.
The victim, Bridget Kufa (29),  got a thorough hiding from the three sustaining serious injuries on her legs and body.
When she appeared at the courts, her legs were bandaged and she was in excruciating pain.
The court heard that Shambawamedza and her husband were renting two rooms at Kufa`s house which she inherited after the death of her parents.
The landlady borrowed money from the JSM pastor and upon paying back she was advised that the loan had accrued some interest of which she then failed to pay.
A sour relationship then ensued between the female pastor and the landlady to the extent that the pastor’s husband began to empathise with Kufa and eventually got into a love relationship with her since the beginning of last year.
Pastor Shambawamedza then took advantage of the fact that Kufa owed her money and started refusing to paying rent.
The tenant and the landlady`s relationship then got sour to the extent that the landlady was evicted from her own house by the pastor.
Kufa and the pastor’s husband agreed that she vacate the house so as to save their own relationship and the pastor’s marriage.
Shambawamedza and her colleagues then got wind that Kufa was in a love relationship with the pastor`s husband and a manhunt ensued.
On February 3 at around 6pm, the women of the cloth teamed up and waylaid Kufa in Unit H, Seke, and assaulted her with clenched fists while she fought back.
Kufa was eventually overpowered and the three took turns to lacerate her. She sustained cuts all over her body and legs.
A police report was made leading to the arrest of the three women.
The court denied them bail and the trial continues on Monday.
Source: Herald
Posted by Mike at 8:59 PM