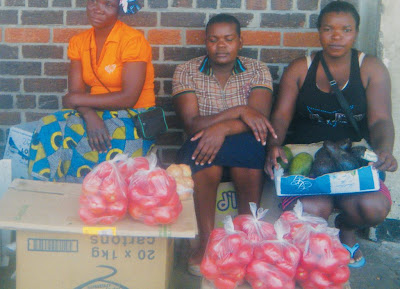 A MASVINGO City Council police officer allegedly tore off a female hawker’s panties as he tried to arrest her for street vending.

Laighton Magunga, whose age was not given, intended to take Ms Mary Mageva’s wares as punishment for street vending.

As he tried to lift a tray of oranges that Ms Mageva was selling, a scuffle ensued between the two.
It is during the scuffle that Magunga reached for Ms Mageva’s panties, touching her privates in the process, before tearing her undergarment.

Appearing before Masvingo magistrate Ms Lynn Manyika last Wednesday, Magunga pleaded not guilty to a charge of indecent assault.
He was remanded to Tuesday.

The prosecutor, Ms Nancy Makuvise, told the court that sometime last week at around 2pm, Magunga, who was travelling in a council truck with other workers, arrived at Benjamin Burombo and ordered all vendors to pack their wares and leave.

He allegedly grabbed Ms Mageva’s skirt while she held a tray of oranges, forced his hands into her skirt and reached for her panties, resulting in him touching her private parts.

The court heard that Magunga successfully confiscated the woman’s wares and the municipal police drove off to their workplace.


As they drove off, Magunga is said to have shouted: “Go and report where you want and you will realise that I am untouchable.”
Source: Sunday News
Posted by Mike at 2:08 PM