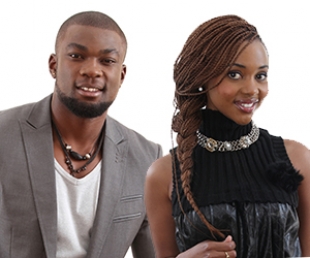 Former Big Brother Africa — The Chase housemate Munyaradzi “Hakeem” Mandaza went to Zambia last week to meet his fiancée Clementina “Cleo” Mulenga and to “thank fans who supported him” while he was in the reality show. Speaking after picking her beau at the Lusaka Airport, Cleo said she was ready to give their relationship with Hakeem a go.
“I am very thrilled that he is finally here. We want to meet our fans and thank them for the support,” she said. Cleo lost out to Namibian Dillish
Matthews for the grand prize of this year’s Big Brother Africa edition.
The mother of one said her feelings for Hakeem were real.
“In the house people pretend, but one cannot pretend the whole 91 days, our love was real in the house and we want to test it outside. I hope it will grow,” she said. Cleo said she will continue doing music.
“I have been hip-hopping since I was six and I want to continue doing music. I have just released my single and I am very happy,” she said.
Hakeem seemed to be killing two birds with one stone as he is also working on a single with the Zambian.
“This will strengthen the Zimbabwe-Zambia relations. The track will have an R&B feel from Hakeem and a hip-hop feel from Cleo,” said Hakeem.
Cleo or “Ice Queen”, as she is known in the hip-hop circles, was nominated for the South African Hip-hop Awards in 2012. She released a mix-tape “Topic of Discussion” in October 2012. She has recorded a track with JK of Zambia and has also shared the stage with the likes of Zone Fam, Ice Prince and Amber Davis.
Hakeem is known as a fitness enthusiast, model and budding musician. The duet will test the couple’s strength in music.
Source: herald
Posted by Mike at 8:56 PM