Chipinge man was beaten to death over an empty beer container 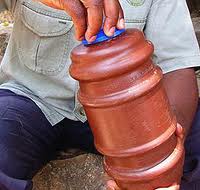 A CHIPINGE man was fatally assaulted following a misunderstanding over an empty beer container last Saturday. Police confirmed the incident and said Tedious Maposa (45) of Manzvire Village, Chief
Musikavanhu, Chipinge was drinking beer at Translink Bottle Store, Manzvire Business Centre with his wife, Mavis Mlambo (39), Amon Mlambo (20) and his young brother, Hosia Maposa when a misunderstanding arose with other imbibers over a beer container.
He was allegedly assaulted by Hardlife Mhute (25), Naison Muyambo, Samson Muyambo (27) and a 16-year-old teenager.
“Amon approached Hardlife who was seating with the other accused three, intending to collect an empty beer container which he had given him.
“Hardlife refused with it and a misunderstanding arose, resulting in Hardlife punching Amon twice on the neck.
“Mavis intervened, trying to stop the fight, but Hardlife assaulted her with a whip,” he said.
Insp Chishiri said when Mavis’ husband, Tedious saw that Hardlife was assaulting his wife, he intervened.
Hardlife and his colleagues allegedly ganged up and attacked Tedious using stones and whips.
“As a result, Tedious sustained serious injuries and was rushed to Manzvire Clinic where he was transferred to St Peter’s Mission Hospital. He was announced dead on admission.
“We managed to arrest the three other suspects, but Hardlife is still at large and we are appealing for information leading to his arrest,” said Insp Chishiri.