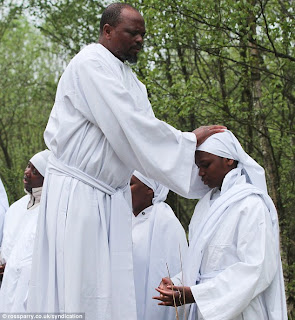 Two Beatrice women belonging to an apostolic sect were yesterday ordered to perform 210 hours of community service for fighting over a married prophet within their church.Esnath Chamunorwa (22) of Inondo Farm in Beatrice was involved in a fiery brawl with her church mate Florence Ruzvidzo (29) of the same location.
Chamunorwa was accusing Ruzvidzo of snatching her boyfriend who is the church’s prophet.  The incident occurred on September 7 and at around 4pm at the farm after Ruzvidzo had visited the prophet’s home for a cleansing ritual.
After getting wind of the news Chamunorwa could not contain it and decided to visit Ruzvidzo at her house. The court heard that upon arrival, Chamunorwa accused Ruzvidzo of trying to snatch her married boyfriend and barred her from visiting him.
In a state of shock, Ruzvidzo professed ignorance of the affair saying she would continue visiting the prophet for spiritual healing. This did not go well with Chamunorwa and in a fit of rage, charged towards the unsuspecting Ruzvidzo punching her on the face.
She picked a wooden stick and hit Ruzvidzo again. Sensing danger, Ruzvidzo tried to escape but was grabbed and punched her several times.
She retaliated by giving Chamunorwa a lower jab and she screamed in pain. After realising that she was being over powered, Chamunorwa picked a metal sheet and struck Ruzvidzo on the head.
Ruzvidzo screamed for help whilst bleeding profusely leading to their neighbours Juliet Machivi and Constance Mamvura to restrain them.
Ruzvidzo sustained a deep cut.
The pair pleaded guilty to public fighting before Chitungwiza magistrate Mr Kudakwashe Jarabini. Mr Jarabini sentenced each to six months in prison wholly suspended on condition they complete the community service at Goshen Primary School in Beatrice.
Source: herald
Posted by Mike at 9:19 PM