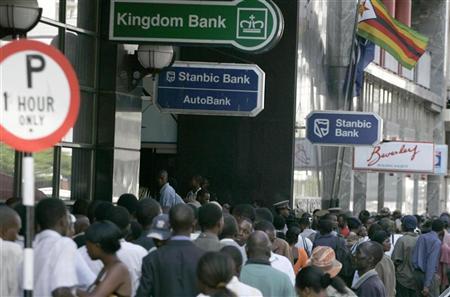 A CASH crisis has hit the country three days after President Robert Mugabe and Zanu PF controversially romped to a disputed landslide victory with banks yesterday reportedly running out of cash, while others limited withdrawals ostensibly to stem a depositors’ run.
Some of the affected banks included Afrasia-Kingdom and the People’s Own Savings Bank (POSB).
It also emerged yesterday some banks stopped issuing personal loans due to uncertainty in the sector in the wake of Mugabe’s disputed victory deemed fundamentally flawed by the West and its allies.
Afrasia-Kingdom Bank at its Bambanani Branch in Bulawayo, yesterday disabled its automated teller machines (ATMs), but attributed the move to the unavailability of suitable denomination notes. “Our ATMs are giving intermittent service due to the unavailability of suitable denomination notes” part of the notice read.
The bank’s head of public relations and corporate communications, Sekai Chitetemere, said the cash shortage was due to high demand during the polling day, July 31, which was a public holiday. Chitetemere said the bank had to run cash in transit services between Harare and Bulawayo to meet the unusually high cash demand.
“The bank also has to import cash to meet this exceptionally high demand,” she added.
Commenting on the non-functioning ATMs, Chitetemere said the bank’s machines were highly sensitive to the quality of notes in circulation and that was why the bank had to import some of the notes.
“The old notes currently available in circulation increase the frequency of ATM breakdowns thereby resulting in service disruption.
The bank has had to import cash,” she added.
It was recently reported that the bank was facing censure by the Reserve Bank after it emerged that the financial institution was reeling from a massive $21 million under-performing loan and could be placed under recuperative curatorship to protect depositor funds and the banking sector.
Southern Eye could not get comment from POSB yesterday, but its clients said it had run out of cash and was limiting withdrawals. But the Bankers’ Association of Zimbabwe marketing and advocacy officer Clive Mphambela said the organisation was not aware of the cash crisis rocking financial institutions.
Critics of Mugabe point out that the cash crisis, albeit minimal, is coming at a time when the banking sector is already in distress due to the ongoing indigenisation process of foreign-owned banks.
Zanu PF, as part of its economic policy, has indicated it will intensify its indigenisation of foreign-owned banks operating in Zimbabwe, among them Standard Chartered, Barclays, Ecobank, Stanbic and Merchant Bank of Central Africa, a unit of South Africa’s Nedbank — which together account for a 70%-plus market share.
Econimc analyst, Eric Bloch, has warned that Zanu PF’s proposed vigorous indigenisation of the financial sector could further destabilise the banking sector.
Source: southerneye
Posted by Mike at 6:43 AM