Tsitsi Mutseta is being ravaged by a terrible disease in U.S.A. Stage 4 Breast Cancer. Help us bring her mother and uncle to her whom she has not seen for 15 years !


My name is Thelma Mubaiwa and I am 20 years old. HelpTsiti is a campaign that is designed to help bring family from Zimbabwe here to the United States to take care of my aunt. The letter below is a letter that I have been circulating around trying to bring awereness to something very close to my heart as well as my family and Friends.

To whom it may concern: 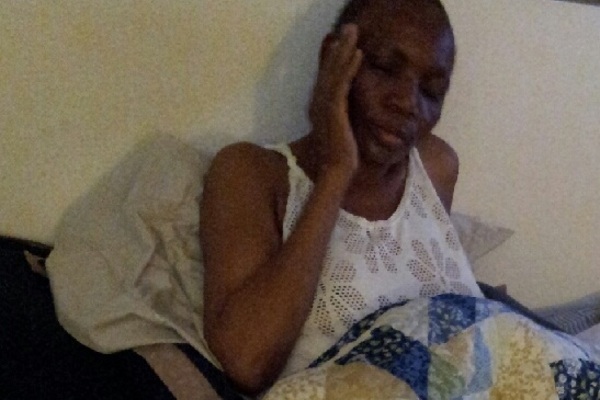 We are slowly losing one of the most amazing and influential people our lives to a terrible disease, Breast Cancer. Tsitsi (Tee) Mutseta, My aunt, My hero, My role model, My everything. This woman is not only the best friend and sister to my mother, this woman is my mother too. She grew up in a small village in Zimbabwe where the HIV/AIDS epidemic has taken most her village. After graduating high school, she was an unfortunate victim of human trafficking. Taken from her home and brought to America where she worked as slave for three years. After escaping from where she was held, one would think she would have given up on people and life. Instead my aunt went to San Diego State University to become a nurse. She vowed that she was going overcome her misfortunes and she was going to do so by going to college. This would result in giving her the ability to be able to take care of the family she left back in
Zimbabwe. While in America she has lost her father and all 4 of her siblings. Leaving her with the responsibility of being mother to 9 children. In 2005, she started a nonprofit organization named Compassion for African Villages. She has been financially and emotionally supporting: 350 children, 200 are orphans, and 8 school teachers. Although the school they attend in Zimbabwe is in disrepair, the children love going. She has been providing the children with uniforms, school supplies and has been paying the 8 teacher’s salaries.

In April 2007 my mother took my sisters and I to visit my aunt in the nursing group home she worked in at the time. Walking in we were greeted with the smiles and hugs from the older people she took care of. A welcome reflected with love reciprocated from the compassion and care they received from her. My aunt was sitting behind a table with a lot of what I would call schoolwork in front of her. She looked at us and smiled but her smile did not reach her eyes the way it normally would. I immediately knew something was wrong. We sat down and my aunt told us she had been diagnosed with Stage 4 breast cancer. Unrestrained, one by one the tears fell from all of our faces...
Tee was in currently in the middle of attending San Diego University to become a nurse. Slowly but surely this disease attempted to rip her dreams from her very hands. But determined and strong willed as she is, she did not give up and shortly after her diagnosis she graduated from San Diego State University. The cancer forced her to stop working as the chemotherapy and cancer began taking its toll. By the grace of God and family and friends who love and cherish her she has been able to keep her apartment and live what some might consider comfortably.
While battling this disease, Tsitsi makes beautiful hats and scarfs by crotchet knitting that she sells at Kobey’s Swap meet to raise money for her organization and herself. On top of this she also has several gardens throughout San Diego, the produce from the garden she then sells at several farmers markets. Although the medicine helps ease some of the pain from the cancer, Tee finds a different kind of solace in the gardens. Being in her garden places her back in Zimbabwe, in the land and home she grew up in. The garden has become a form of therapy for Tee and even when the medicine is not easing the pain, the garden does a very great job. Recently due to the nature of her cancer she has been unable to function fully in the garden and do what she loves best.
This cancer has now taken a hold of her entire body and she is very very sick. Because she cannot go home and see her remaining family, we would like to bring them here to her in America. We are trying to raise enough money to bring her mother and uncle so they can be there to take care of her. We are asking that you open your hearts and help us reach this goal to help a woman who has spent her entire life helping others. Just as the name of her nonprofit organization let us show compassion for Tsitsi and help to bring her family here. Thank you so much in advance to those who will donate and if you cannot donate even just a prayer would help. Help us make this story viral. Share with a friend, who will share with another friend and sooner than later more than enough people will know. Compassion is contagious, let’s spread it all over!
Sincerely,
Thelma Mubaiwa, family, and friends.
After being refused an emergency visa for 7 years to come to the United States and take care of her sick daughter the visa was approved  5/6/13. We are now on a mission to raise money for her mother and uncle to come as well. The cost for the earliest tickets from Zimbabwe here for two people will be roughly $6,036 for round-trip tickets give or take a couple hundred dollars.Our goal is to have them here as soon as possible. The remainder of the money will be used as an insurance just in case the ticket prices rise. Also we will need to pay for baggage as well and the food they will eat on the way here.
We understand we are requesting a lot but anything will help. if you cannot donate PLEASE share this story, share this website and help us to get this story viral. We are asking for help to the one person who has helped everyone her entire life. It is now our turn to return the same compassion to her.

Take a moment to check it out on Indiegogo and also share it with your friends. All the tools are there. Get perks, make a contribution, or simply follow updates. If enough of us get behind it, we can make 'Bring Tsitsi her famil' happen!