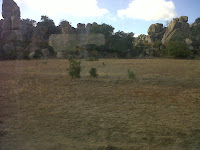 A BUHERA woman (22) was raped last week by an unknown male adult after she failed to pay him $2 for escorting her to where she was going.

Police confirmed the rape of the woman from Zireya Village under Chief Nyashanu.
It is alleged that the woman left home at around 8.10pm and boarded a bus to Mudanda Business Centre where she boarded another car to Choto Business Centre.
Assistant Manicaland police spokesperson, Assistant Inspector Luckson Chananda, said: "Upon arrival at Choto Business Centre she approached patrons who were drinking beer and asked them for directions to Dongwe Business Centre. One of them volunteered to escort her to where she was going.
"After walking for about 5km, the unknown male demanded $2 as payment for escorting her. She told the man that she had no money. The suspect demanded s*x as payment. He produced an Okapi knife and threatened to kill the woman if she refused to comply with his instructions. She was ordered to remove her clothes and was raped once."
Asst Insp Chananda said the suspect told the woman that he wanted to rape her the whole night. She lied to him that she wanted to relieve herself and took the opportunity to escape while naked.
"She was helped by Divas Mangoma (54) of Chuma Village under Chief Nyashanu who gave her clothes and filed a police report. The accused is still at large," he said.
Police urged women not to travel alone at night and that they should be alert about the people who volunteer to help them because at the end those people might harm them.
Meanwhile, raping his employer's 14-year-old daughter earned a Chimanimani tractor driver a 20-year jail term.
Steven Chivenda (49) of Nemutedzi Village under Chief Mutambara, Chimanimani appeared before Mutare regional magistrate, Mr Trynose Utahwashe, who convicted him after a full trial.
Two years of the sentence were suspended on condition that he does not commit a similar offence in the next five years, leaving him to serve an effective 18-year jail term.
Public prosecutor, Mr Malvern Musarurwa, told the court that in December 2009, Chivenda dragged the juvenile into his house and raped her once. Mr Musarurwa said Chivenda threatened to harm her if she disclosed the rape to anyone.
The teenager later told her mother about the rape and a report was made to the police leading to Chivenda's arrest.
She was sent for a medical examination and the report confirmed that she was raped.
Posted by Mike at 6:46 AM