Mutare Soldier was kidnapped and forced to have S*X with a woman for 4 days !!! 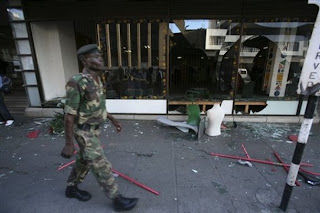 A 25-YEAR-OLD soldier was allegedly kidnapped and detained for four days by suspected female rapists, who are said to have sexually abused him several times before releasing him early this week.

Police in Mutare have confirmed the incident, saying they were hunting for the suspected culprits.

The suspects, two women and a male counterpart, were allegedly travelling in a Mercedes Benz vehicle. According to Clean, after an hour’s drive towards Mutare, the driver diverted from the route and when the complainant asked where they were going, he was threatened.

“After diverting from the route, the complainant asked where they were heading to and they told him they were going to get some food. The soldier requested to be dropped, but the driver produced a knife and threatened him with it. One of the female passengers blindfolded the complainant with a black cloth,” said Clean.

According to Clean, they then took the complainant to an unknown house where they undressed him and took away his phone and $35. The suspects ordered the man to be intimate with one of the women on several occasions.

They kept him from the 19th up to the 23rd of this month. During the early hours of Tuesday, they blindfolded him and took him to Mutare where they then dropped him in the Dangamvura Mountains.
According to Clean, the suspects stoned the complainant on his left foot where he sustained a serious injury before driving off at high speed.

The soldier made a report at Sakubva Police Station, prompting investigations.