A man in Mutare was found with a mysterious cobra in an empty beer can at Chidzere bar in Mutare. The One meter Cobra was rapped around Blessing Marota's neck with its head buried in the beer can. 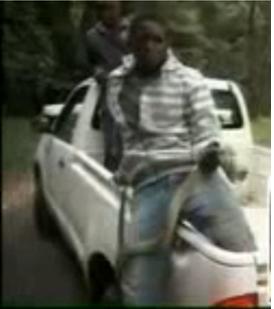 It is suspected that Blessing was drinking beer with his friends and every time when the beer was finished it is alleged that he would knock the empty beer can containing the snake and in return the snake would vomit some cash. It is alleged that when Blessing was taken to Mutare Central position one local businessman attempted to run away with Blessing and the snake but was intercepted by the crowd and many questions are being asked why the local businessman attempted to run away with the mysterious snake.

After failing to remove the snake's head from the beer can, Blessing is reported to have killed the snake but surprisingly one local businessman in Mutare collapsed and died the very time the snake was killed.

Zimbabwe prostitutes work knowing that they are HIV Positive. When I say work I mean prostitution. Sex Workers like Queenie Mulungu try to make a living in border crossing towns (Chirundu Border Post) where there is little economic opportunity. Queenie is fully aware of her HIV status (HIV Positive) but she doesn't disclose her HIV Status to her clients because she says that if she tells them that she is HIV Positive they won't be no business.
Only last week she slept with over 50 men and only used condoms with 5 and this simply means that 45 are now infected. Please note this is only one week, after one month at this rate 180 men will be infected. Also note that most of these people are married so their partners are more likely to be infected too. That's double the 180=360. So in simpler mathematics Queenie is spreading HIV to at least 360 people per month.
Some of their clients are truck drivers who tend to blame the slow clearance at border post leaving them with no option besides trying to entertain themselves by drinking and having sex with these prostitutes.
Mwansa Chileshe another sex worker says she tells her clients that she is HIV Positive but most of her clients don't believe her because she looks fit and health. Mansa says most of the men don't like using condoms because the men always say "these things are not good and God did not create them". Mansa says she gets worried but she doesn't have any option because she is too poor " what can you do, you are hungry, you don't have soap, your kids want clothes then you just have sex risking your life"
Efforts to combat the spread of HIV, such as condom availability, HIV counseling and Testing have grown in the past 10 years in Africa. Another program called the One Stop Border Post; aims to increase economic trade by cutting wait times at border crossings. It may also help stem the number of liaisons between lingering truckers and sex workers.
Ladies and Gentlemen I took my time to write this article so that you really understand what's going on in Zimbabwe and our neighboring countries. Aids is there and people are dying daily because of this deadly disease so please be careful, always use a condom and abstain if possible.
"Zimbabwe Latest News Blog " is there to entertain you and to educate you !!!!
Please remember to share this article with your friends or relatives. Just hit the share button below !!!!
Posted by Mike at 7:36 PM No comments: